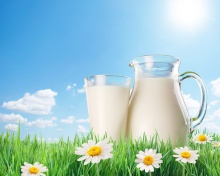 The crisis has passed

The drop in prices in the world dairy market was due primarily to a sharp increase in milk production in the main export regions. Dedicates have increased significantly in New Zealand. Since April 2015, the quota for milk production has been abolished in the EU, and farmers have taken full advantage of this opportunity.

Over time, prices fell and milk production began to decline. Now we can confidently say that in the next six months the raw material will be noticeably less than in 2016, which will support prices.

According to the results of 11 months of the past year, milk production in 28 EU countries exceeded 140 million tons, which is only 0.74% more than in the same period of 2015. Recall, the year in the EU began with a surplus of 5.7%.

In December, the last of the major producers of raw materials, the Netherlands, showed a negative trend. Until now, production in this country has moved ahead of schedule. In December 2016, the yield of local farmers amounted to 1,204.73 thousand tons, which is 0.05% less than in the last month of 2015. Of course, the reduction in production is almost imperceptible, but it has a symbolic character.

Dynamics of milk yields in the winter period suggests that in the first half of 2017 in the EU, the decline in production will dominate. Its dimensions are still difficult to assess.

In the last months of 2016 in New Zealand, the supply of milk for processing was 4-5% lower than the year before. In general, for the season, New Zealand's Fonterra expects a reduction of 5-7% in the supply of raw materials. In Australia, the season, which began in July, is still 10% worse than the previous one.

Production falls in South America. Only farmers in the US continue to increase milk yields. However, the strengthening of the dollar has consistently reduced the impact of US supplies on the world market: it is cheaper to buy milk in other countries.

China's export activity has also recovered. The forecasts of the country's economic growth give hope that it will continue in 2017. For example, in the first 11 months of last year, the volume of imports of milk to the Heavenly Cheese from New Zealand increased by 30.9%, butter by 23.5%, dried whole milk (CMS) by 17.3%, and imports of dry skim milk (SOM) decreased by 6.3%. The PRC is also increasing its purchases from other sources.

The first signs of a decline in oil production can also be seen as a positive signal for the dairy market. Many importers of products are oil-producing states so that an increase in revenues from the sale of basic raw materials can increase their interest in dairy products.

In December - January, a temporary equilibrium was established in the world milk market. Only a slight adjustment of prices was noted within 2-3%. The average price of one of the market indicators, the Global Dairy Trade auction, was in the range of 3300-3500 dollars/ton. Contracts with terms of sale in May - July that is at the peak of production of raw materials in the Northern Hemisphere, were traded at comfortable prices: SPM - 3300 dollars/t, COM - 2600, oil - 4300-4400, cheese “Cheddar” - 4000 dollars/t.

The improvement of the dairy market is also confirmed by the fact that the European Commission actually stopped interventions. SOM reserves accumulated in the framework of interventions remain huge, but they do not increase anymore. They are 355 thousand tons. The European Commission even tried to sell part of the stock, but without much success. Europeans do not want to bring down the market, and therefore set a price of about 2100-2200 euros/ton. As a result, at two auctions, only 40 tons of the proposed 36,000 tons were purchased.

Stabilization is also indicated by the participation of producers in the private storage program. Milkmen derive mainly butter and cheeses from it, since the market allows producers to sell dairy products at an affordable price. For example, stocks of oil in private storage, which reached 102 thousand tons in July last year, were reduced to 38.7 thousand