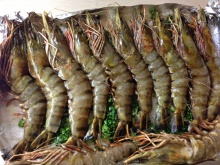 Vietnamese shrimp exports slowed at the beginning of the year

Vietnamese shrimp exports, which showed recovery in 2016, began this year with a noticeable decline. In January this year, sales of shrimp from Vietnam to foreign markets in value terms decreased by 12.7 percent compared to January last year and amounted to $199 million.

The decline was due to technical barriers in some markets and a decline in demand from the main markets. In addition, reduced the supply of raw materials, in connection with which processing companies experienced a shortage of shrimp for processing.

Among the ten largest export markets for Vietnamese shrimp are the EU, the US, China, Canada, Australia, Switzerland and some other countries, accounting for 94.8 percent of the total volume of shrimp exports from Vietnam.

In January 2017, Vietnamese shrimp exports to the United States, China, South Korea and Australia showed a decline, with the largest decline showed shipments to Australia, declining by 45.5 percent year-on-year. Sales in the US and China fell by 27.3% and 33.8%, respectively.

The largest importer of Vietnamese shrimp was the European Union, which accounted for 21.9 percent of total exports of this product from Vietnam. The second place was taken by Japan (21.8%), and the third place was the USA (18.3%).

Supplies of shrimp from Vietnam to the EU in January of this year in value terms showed the highest growth, an increase of 17.1 percent compared to last year to $43.5 million. Meanwhile, exports of these products to the Netherlands jumped by 138.3 percent, and sales to the UK and Belgium rose by an annualized rate of 19% and 15.1%, respectively.